Well… as much as I hate proprietary dongles, I must say this is some interesting piece of news.
A new website was recently created, announcing the arrival of the Cobra Black Fin, a dongle to play isos on the PS Vita.
What’s intriguing about the Black fin is how it’s going to work: the Black Fin relies on p2p sharing of the games in order to work. In order to play a specific iso, you’ll need someone, somewhere, to have the original game cartridge inserted into the “Black Fin reader” connected to their PC. It probably does not matter who that person is, or where they are, what matters is that when you attempt to play an iso, the PS Vita will try to authenticate the cartridge, which will trigger a signal on the black fin card (inserted into your vita) to look for an original cartridge somewhere on its network (the cartridge connected to some guy’s PC), and communicate with that original cartridge for authentication. One’ll still need the iso on their SD card, and the original cartridge will only need be needed for the authentication steps, I assume.

According to their marketing description, this is so that you can share games with your restricted circle of friends. Practically, I’m convinced their global p2p network will ensure you can play whatever game is on the network, and everyone on the net will be “your friend”.
Like it or not, it sounds like a very clever and out-of-the-box idea. From a technical perspective, this is brilliant.
From a usefulness perspective, however, it assumes people will play nice and share games on their end. Maybe the Cobra Black Fin network will work a bit like torrents, letting you play games only if you share some of yours. There’s also the risk this could die if it does not gather momentum: if many people buy and use the product, Black Fin have built themselves a huge network of p2p piracy. But if only a few hundred people get it, it will die as soon as it appeared.
Long term too, this is most likely not a viable product: as less people use it, less and less games will be available on the network.
Nevertheless, from the technical approach, I can’t help but think this is a pretty brilliant idea. Nobody likes DRM piracy dongles, but you have to admit the idea is ingenious. How does the black fin card contact its p2p network in the first place? That assumes they have ways to run some level of unsigned code, and I’d be interested to understand how this works. 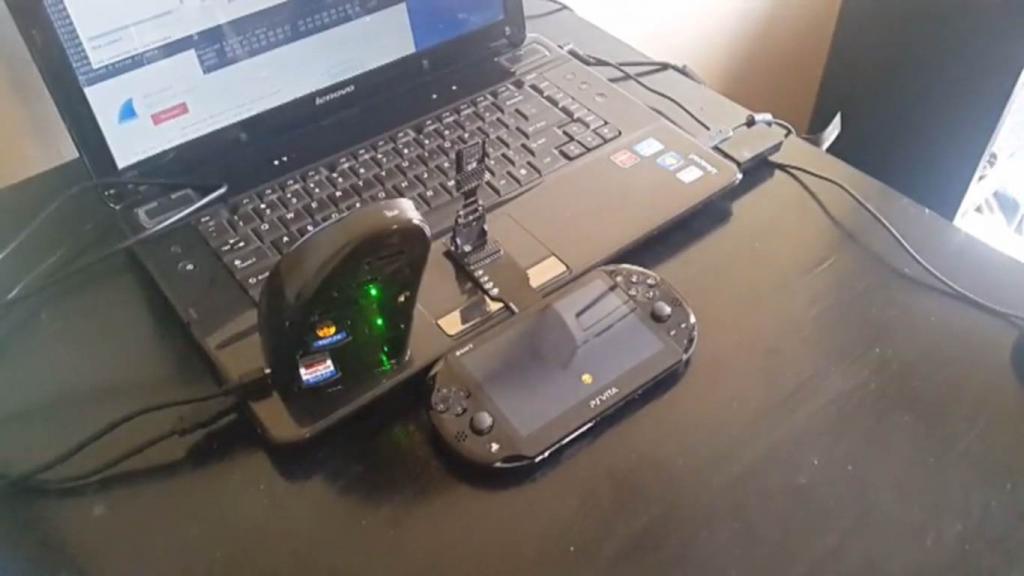 Such a system makes the Vita 3G much more interesting for pirates, all of a sudden. You’ll need network access in order to play the isos.
We’ve known for a while that hackers know how to dump vita cartridges (therefore acquiring the isos will probably not be a problem for people using that system) andhow to run the isos, with some limitations. It is possible this dongle announcement will force some hackers out of the woods, to provide the scene with free piracy mechanisms, just like we’ve seen on the 3DS scene.
We have yet to confirm if this is true or some advanced hoax, but it does look legit. The dongle is announced to hit retailers by the end of the month.
The Full Press release:


The Black Fin allows Vita and Vita Slim Wifi and 3G users to share their Vita games over the internet.

You might ask why it is necessary to authenticate the game you wish to play using an original card connected to a server?

Vita has a very secure card authentication mechanism, which to date has not been penetrated and is based on secure cryptography. It is unlikely that a direct authentication method which avoids having to use a peer to peer system will appear any time soon. As a result Cobra has designed a unique and cutting edge peer to peer sharing device which allows users to share their favourite games with friends over  an internet network.

Vast resources have been poured into designing a flash card which is the same size as the original Vita card itself. Yes, the Cobra Black Fin squeezes all of its technology into a card no bigger than a Vita game card with tons of features and packing serious hardware power! When you look at the circuit board design and components used you start to understand the expertise and time required to pull off a design of this magnitude.
Expect release of the Cobra BlackFin end of December 2015..

Resellers can reserve their stocks in advance by e-mailing: sales@cobra-blackfin.com

Initial batch is sure to sell out fast, so be sure to reserve your stocks in advance to avoid disappointment.